Garden of the month April 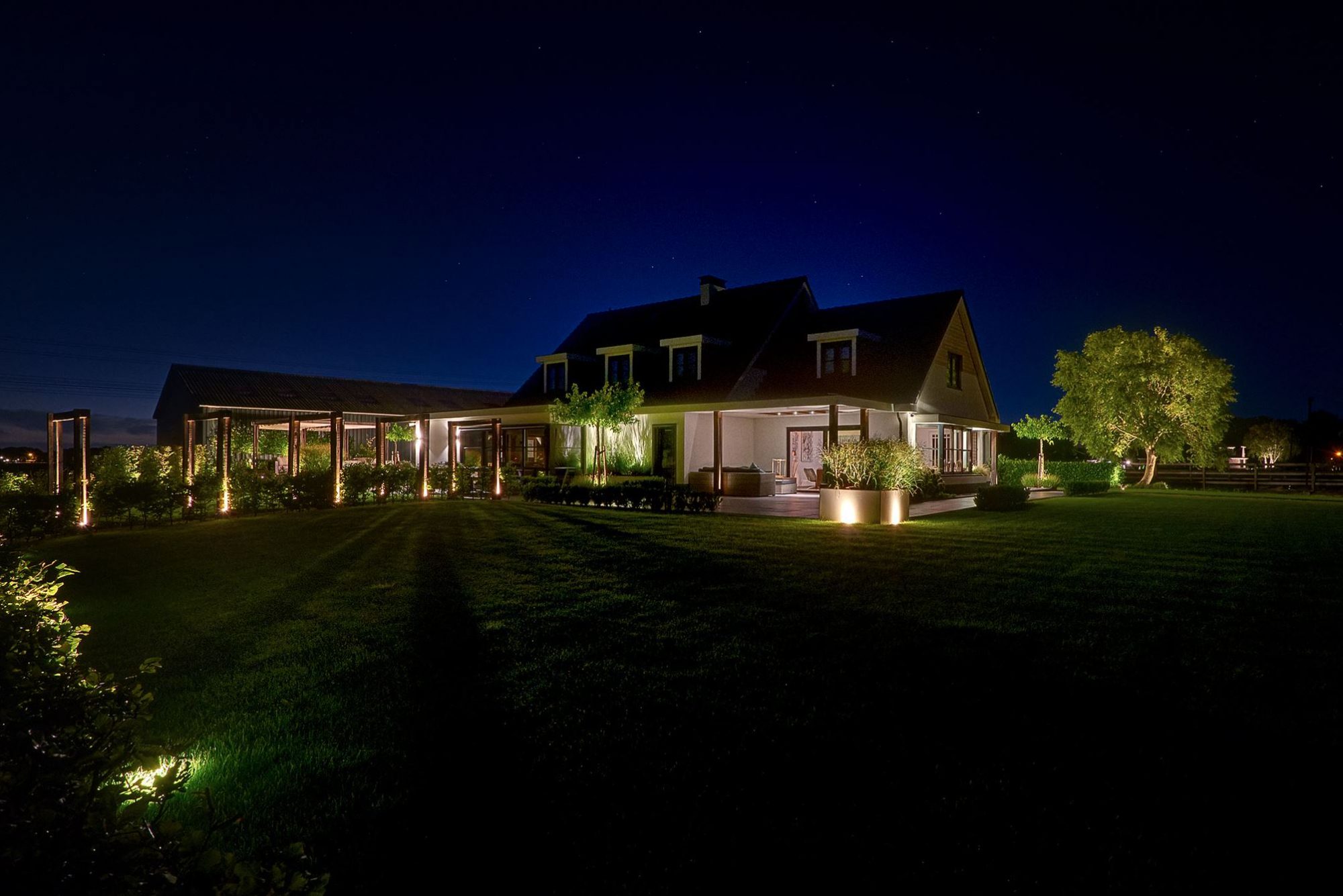 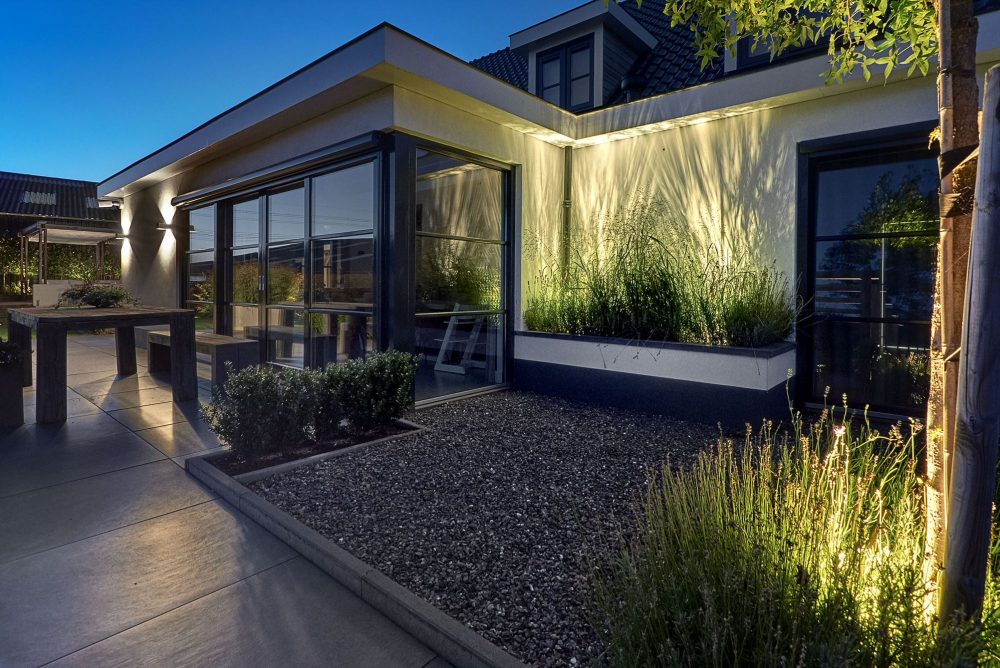 Sometimes you would like to take a garden home

Garden of the month April

This beautiful country house, surrounded by a spacious and tastefully landscaped garden, is located between the extensive farmlands, close to the town of Bunschoten-Spakenburg, Holland.

Jan Boer of Boer Tuin & Landschapsprojecten is responsible for this gem of a garden. Together with architect Michiel Blokker, he ensured that the outdoor area harmonizes perfectly with the lines and contours of the country house.

The interplay of lines of the pergolas in combination with the sleek roof moldings ensures that the modern architecture of Michiels hand flows seamlessly into Jan’s rural garden design.

The final design of the garden was arrived at in close collaboration with each other.

And the collaboration with Installation Company Groen also went smoothly. The owner wanted the lighting inside to match the outside lighting. After good consultation, the right solution was also devised.

When asked what the lighting plan looked like, the answer was simple; there was no real lighting plan. Initially there was no light at all in the garden, but this gradually developed during the realization. For example, Jan says that he thought it was a great idea to install lighting from below between the double uprights of the pergola. Indirect light with which you create a fairy-lit portal at night, which leads visitors and residents from the long driveway to the house.

It was a bit of a challenge to get the Sus Small Sun (the predecessor of the current Terra) between the uprights, but by finally milling the spots in, they achieved the current result. 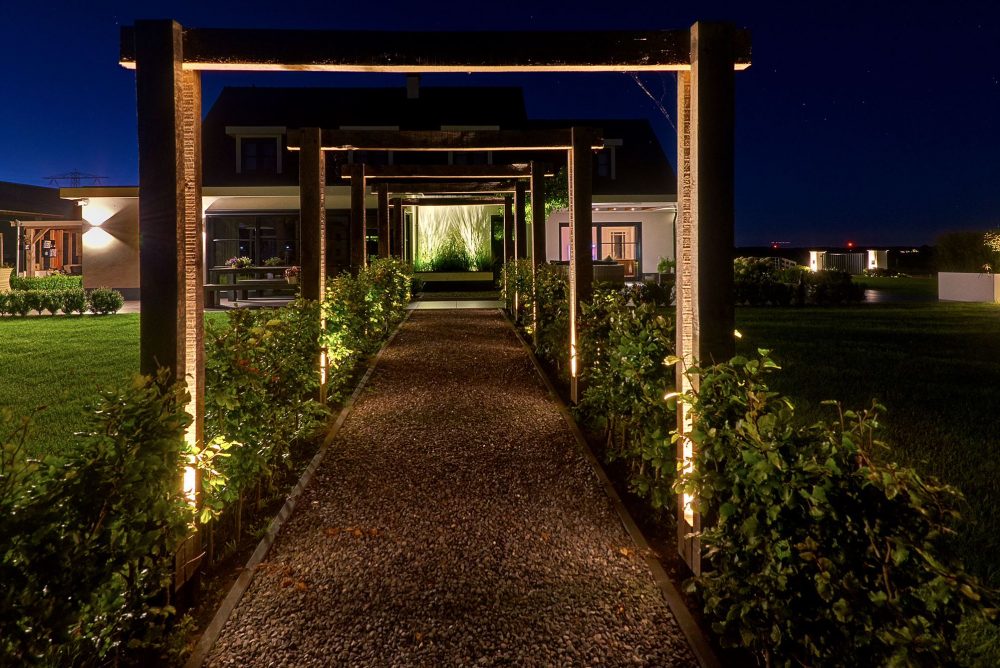 The raised terrace, at the back of the plot, is partly covered with custom-made Platoflex walls, a ready-made wall system that can be put together according to your wishes. Jan is very pleased with the company from Wijhe, because you can indicate exactly what and how you want to design it. Even the recesses for the lighting can already be prepared!

The Sus Square has therefore been applied to some of these walls. “The advantage of this up and down lamp is that you can change the light beam by means of slats around the light source, which in turn gives a surprisingly playful effect,” says Jan. “A wall lamp that I really like to use, especially now that the Sus Square is available in several contemporary colors”.

The steps to the raised terrace are equipped with the Sus Mini Sun. A small subtle recessed spotlight that just accentuates the contours of the steps. But the Small Tops (predecessor of the Calla series) also provide a fantastic play of light between the grasses and the white wall behind it.

Further on, a number of strategic light accents have been added in the garden, which in turn provides the necessary depth in the garden. Such as the spots that are rhythmically placed in front of the beech hedge, with a beautifully shaped Salix as a highlight, which is fully illuminated.

The importance of light

And Jan Boer loves it, light in the garden. “It makes it complete, it gives a garden and certainly the house a completely different dimension. And you will enjoy your garden twice as much. A garden without light is really no longer possible” says Jan “even if it is just a few small accents, but it does so much!”

Because so many details, but also variation has been applied in this garden, we at Suslight think it is more than deserved to make this garden from Boer Tuin and Landscape Projects ‘Garden of the Month’. Nice work, Jan!

We only work with outdoor LED designed by ourselves. By using the latest technology with the best quality, the lighting is good for 75,000 thousand burning hours. Due to this high quality, we offer a 5-year warranty on all our products.

In 2022 we will start taking in old lighting. Our reseller, your installation landscaper, will take in the old lighting. They hand it in to us and we process it. In this way you contribute almost unnoticed to the recycling of something that would otherwise have disappeared in the waste container.

Know how it's made

Lighting is all about the right combination of factors. Suslight has thought about everything. From raw material and light quality to power and voltage. Only with the right composition and the right production technology can we achieve this high quality.

``Sustainable development is development that meets current needs without compromising the needs of future generations.`` This is our company policy, and we act accordingly. We are a sustainable business and keep moving to become a more sustainable one. 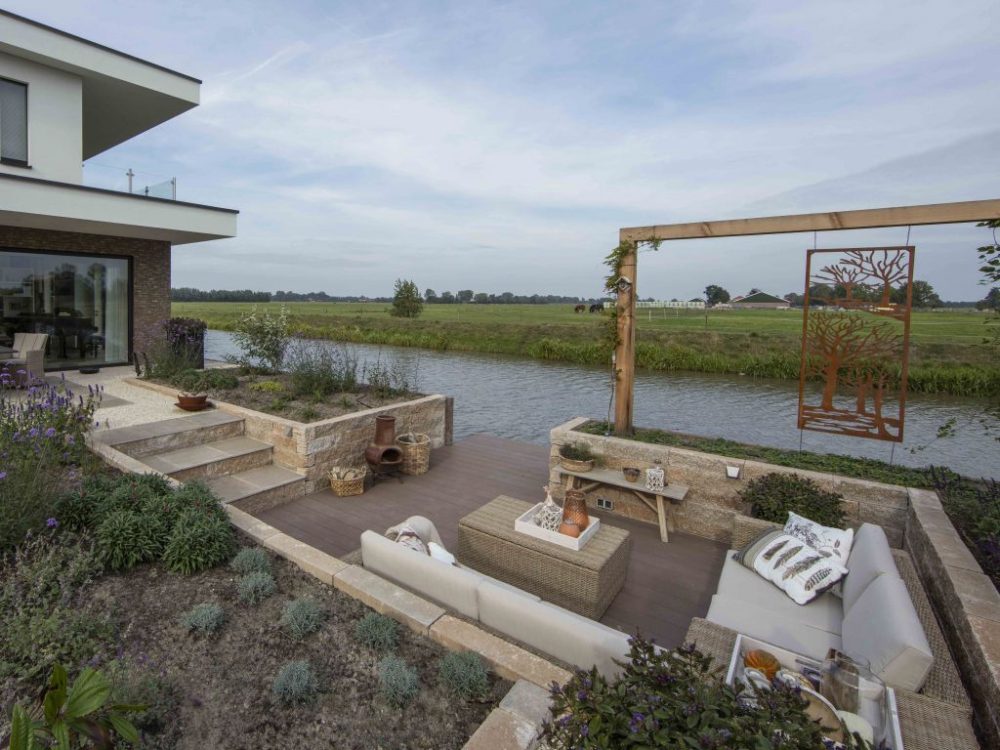 In the real world 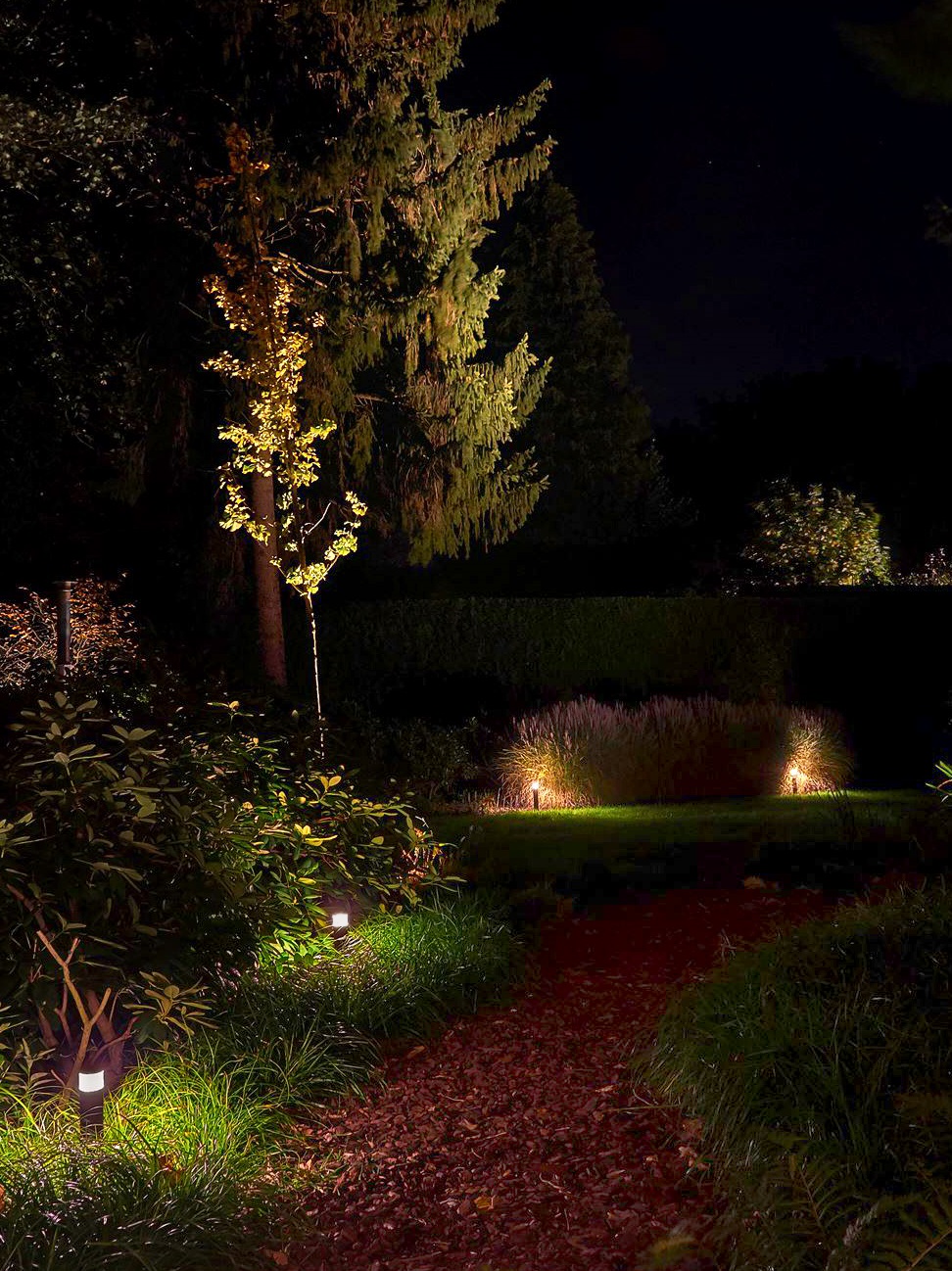 In the real world

The smart method of Robert Bikker